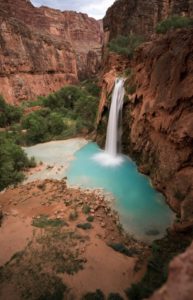 The season I am in right now feels like the time our family hiked the Grand Canyon to Havasu Falls.

My mother died the year before. Our lives had been totally disrupted. My adopted sister was sent to live with our family. She had Fetal Alcohol Syndrome and had bad behavior problems. She was also grieving our mother’s death and now was separated from the only father she had ever known. Not only did we have to change our routine, we also had to agree on disciplinary measures to which we ALL had to adhere. I was in charge of getting all her papers in order so that she could collect Social Security. I had to start the process of finding a group home she could join. That was a year long process. And then I also had to work to see if I could find a job she could do to keep her busy.

I found myself resenting all that had happened to me—feeling so sad at times because nothing was the same anymore. I never had time to grieve my mother’s death and six months after her death my father announced he was getting married. I felt shock and anger when, in the midst of all of our turmoil, he wanted us to go back to Florida for the (big) wedding. It was one of the first times I was able to stand up for our family and tell my father no. We were in the midst of turmoil and I was not sure my sister would take that transition well.

A year passed and after my sister’s behavior improved and everything else was set, we were able to move her in to the group home successfully. She would still be able to visit us and also to stay with us for a weekend if she wanted.

I decided we needed a change in our routine. So we hired guides to take an adventure vacation. We decided the Grand Canyon was our destination. We did not know anything about the Grand Canyon so we started reading about this great adventure. We were all excited. And then I started reading the book entitled “Death in Grand Canyon” by Michael P Ghiglieri and Thomas M. Meyers. They wrote gripping accounts about 550 people who met their untimely deaths in the Grand Canyon—many because of carelessness; others simply because they did not know where they were or where they were going and ended up falling over the edge. So our guides had my full attention and I was focused. My excitement became mixed with caution.

For at least four months before our trip, I had kept in touch with the guides by phone and they told us how to prepare. I communicated all of this to my husband whom I knew was already prepared because he had been a Boy Scout, and had been a medic in the army in Vietnam for one grueling year.

I spent the next four months trying to get myself physically prepared to do this. But the time came sooner than I was prepared. I finished reading the book on our drive to Arizona. Before we hiked in, we spent four days in Flagstaff to get acclimated to the altitude.

We had two guides who did this for a living. They were in their mid to late 20s to 30s, were obviously physically fit, and trained in rescue and wilderness life support.

They had prepared all the meals for us at my specifications; it was all plant-based, mostly raw and nutrient and energy-dense. They told us we would have to eat well because of the energy we would be expending. And we had to carry all our gear, including all the water we needed.

It was a 10 mile hike from the rim to Havasu Falls. I was so annoyed with myself when I twisted my knee on the hike in. I added pain to everything else I had to focus on.

The terrain was different than I expected. At first, it was like walking on a nature trail, but soon we were hiking over large rocks of different sizes and shapes. The terrain was uneven and unpredictable. There were no trees—no shade and the sun’s rays seemed to pound on me giving me very little relief from the heat. The only deliverance we had was when our guides found rock formations where we could sit and eat. Some of the formations were so huge we could get under them and get some relief from the heat. But that time passed too quickly and then it was time to get going again.

The terrain never changed; the climate was hot, and the piercing sun unrelenting for at least 8 miles. Although I knew the ground beneath my feet was solid, I never knew where my foot would land because of the unevenness of the rocks. So it seemed to me that every step I took expended more energy.

We walked and walked and our guides kept telling us, “Not too much longer; almost there.” They were so upbeat our kids absolutely loved them. They taught them great lessons and told them great stories about the history. I did not hear most of the stories; I was the last one on the trail—concentrating on where I walked; thinking about the stories in the book where people died of heart attacks.

We finally got to the place where there were more trees and we saw streams. But by this time fatigue had set in and although everyone still saw a smile on my face, my attitude inside was not upbeat. I was tired and starting to feel sorry for myself. At the 9.5 mile point (you have to understand I did not know it was the 9.5 mile point; it seemed as if this adventure would never end), I finally sat down on a rock and cried. No one saw this because everyone else had rounded the corner and no one came back to check on me for what seemed like one hour.

I composed myself and got back up. I don’t think I walked more than 50 steps, rounded the corner, and my mouth dropped open. Right before my eyes was the most beautiful falls I had ever seen to that point in my life—Havasu!

Our kids and the guides were engaged in exhilarating conversation about the area. The kids ran to me, so excited, animated, and delighted with their experience. I felt so silly. But the fact was I was in pain and I was tired. I needed to be kind to myself instead of beating myself up.

I have experienced some hard times over the past 18 months and my emotional terrain reminds me of my experience on our Grand Canyon hike. I have felt as if the sun has beaten down on me mercilessly; the ground beneath me is unfamiliar and trips me up, and it seems as if everyone has moved on while I am sitting down licking my wounds. It also seems at times as if no one cares.

BUT the TRUTH is the terrain will change only if and when I keep walking. I need to focus on the fact that people care about me. Self-pity is dangerous, and I need to work at staying away from that emotion as hard as I can. I can replace it with emotions of gratitude—gratitude for the people who are still in my life and who care about me; gratitude for the beauty that is all around me now. I can be grateful for a new day I get to start all over again.

The fact is that I am the only one who can really take care of me and I need to start by being kind to myself and applauding the accomplishments I have made today even if they seem small. I get to take time to laugh and I can enjoy others when I see them taking delight in their experiences. All of this enriches my experience and puts me on a different trajectory—one that will only improve my life.