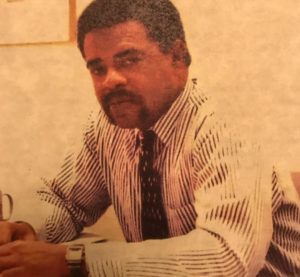 I first met Abel 20 years ago after he and my sister got married; they were on their way to their honeymoon. He was handsome and emitted an air of strength. I could tell that he was no pushover, but I also saw gentleness in the way he treated my sister. My only disappointment was that he smoked; he did so in a way that was very considerate of all of us—never smoked inside and never in our presence. However, his smoking bothered me because of the health consequences to him.

A few years after we became friends, I thought it my duty to let him know what this habit was doing to his body. He allowed me to speak and then let me know in no uncertain terms that he was well aware of the consequences to his health. It was clear to me that no amount of persuasion on my part was going to change anything. He was going to decide when and if he stopped smoking.

I personally found it difficult to honor his boundaries; I knew the ultimate consequences. However, I also knew in my spirit that if I brought this up again, it would likely ruin our relationship. So I never mentioned it to him again. Nonetheless, we visited them in California several years ago and we went to Venice Beach for the day. He happened to ask my husband how our family was “so energetic.” He told him he had never seen people who walked so fast and continued to be so active. My husband took that opportunity to discuss the fact that he could be, also, if he did not smoke. Let me just say, it did not go well. Abel became angry and defensive.

As a doctor, I have a responsibility to educate my patients about the dangers of their poor health decisions even if they resist, become defensive, or angry. I accept their opposition as a necessary part of my job and move on—sometimes knowing full well that the patient will never really change.

I always have to remind myself that I am not everyone’s doctor. There are definite times I have to intervene, whether I am that person’s doctor or not—for instance, in the case of child or dependent elder abuse. I am a mandatory reporter. However, I am not put on this earth to speak to everyone’s health choices. Even though I feel called to educate as much as possible, not everyone wants to hear what I say and not everyone believes that what I say applies to them.

Abel helped me live the reality of this truth. I got the opportunity to decide every day that the most important thing was my relationship with him; it was more important than trying to make him stop smoking. Over the years, he needed to be placed on different pharmaceuticals for various conditions such as high blood pressure, headaches, etc. This was difficult for me to see. However, my choice continued to be to honor our relationship.

When Abel got sick with stage 4 pancreatic cancer 1 ½ years ago, I felt sick to my stomach. I figured out some of what I could do to help him. I sent him suggestions of things he could do to prolong his life and improve his symptoms. After he got permission from his doctors, he followed my suggestions with a passion. My sister told me that he actually improved and had more energy. But Abel never stopped smoking.

My sister told me that years before she met him, Abel tried to stop smoking using hypnosis. She said he really desired to stop smoking for his family. She also called me twice over the past 20 years excited to let me know that Abel was trying to stop smoking again. He tried going cold turkey, and using the nicotine patch—nothing he tried worked. So again, it was not because he did not want to stop; it was not because he did not understand the consequences of smoking; he was addicted to nicotine. The interesting thing to me was that he never told me about his efforts to stop smoking. And I never brought up the topic again. I respected him enough to wait for him to open that door.

Abel had good boundaries and he was willing to take responsibility for his decisions. Everyone is not so disposed. For instance, I know people (not my patients) who tell me not to deal with their poor health decisions, but they frequently call me to discuss their symptoms with me—sometimes panicking when they believe the new symptom they are facing is “really serious.” They want me to tell them what they should do. These are times that try my soul. I ask them if they are ready to deal with the elephant in the room. If they are not, I have to kindly remind them I cannot deal with their issues or tell them what to do without dealing with the one subject they do not want me to address. And I sometimes have to let them go.

Over the years, Abel has really helped me to see what I am accountable for and what others’ responsibilities are. How I approach the situation is a bit clearer although still difficult when it comes to a doctor-patient relationship. However, it is quite a bit harder emotionally when it comes to those I deeply love. So I have to keep reminding myself that my relationship with them is of the upmost importance. I know that if I had not respected Abel’s boundaries, I would not have developed a good relationship with him, and he would have rejected the gift I gave him at the end. I believe one day I will see him again and we will have a wonderful discussion about this.