DEALING WITH GRIEF DURING THE HOLIDAYS 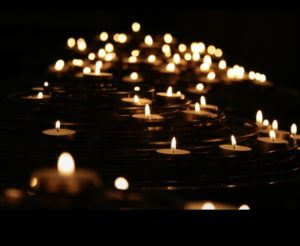 Christmas had always been a magical time for me up until that fateful day two weeks before Christmas when my 17 year old cousin, in a purposeful effort to ruin my Christmas, told me that she thought I was too old to still believe in Santa Claus. I was 9 years old—possibly too old to still believe in Santa Claus. However, there had been so many changes in my life over the previous 3 years, that I guess I just wanted to hold on to something I was familiar with—something I enjoyed.

You see, my life had changed drastically from what it had been in Panama to where we were in New York City. I had been able to romp freely on our property in Panama. We had a small stream behind our home. There were mango trees on our land and a field of sugar cane not too far from us. I also saw colorful butterflies and parrots every day. But in NYC I was stuck in a tenement 2–bedroom apartment; my mother afraid to let us go outside to play. Her fears? Too many gangs and gang activity.

And now, even my Christmas was ruined—the magic gone. It was never the same after that. Of course, I learned to adjust and found another “normal.”

In 1985, I was the physician on-call for Christmas Eve.  My call started December 24 at 9:00 AM and was to end at 9:00 AM on Christmas Day. All the doctors in our building (about 25 in all) had closed their offices on December 24 to prepare for Christmas. But Dr. Jackson (Family Practice) and I (Pediatrics) decided to work the morning—seeing all who really needed to be seen without them having to go to the ER.

One of my partner’s patients called. He was sick and had been seen by my partner several times that week, including the night before because he was still not any better. I was busy seeing patients and the nurses were triaging the calls. The nurse who spoke to the mother of this child came to ask me what to do. I told her to give the mother the option to bring the child in if she was still concerned. After all, that is why I was there. The nurse told me later later that the mother decided to observe the child.

I got several calls after the noon hour when the office closed. None of the calls were from the mother of my partner’s patient. I assumed the child was stable.

I was a young mother of a 6 year old and a 1 year old, whom I was still nursing. So between calls, I was busy—preparing for our Christmas celebration, as well as doing normal Mommy things. I finally fell into bed around 10:00 PM totally exhausted. I remember that it was a very quiet night. That was because my nights-on-call were NEVER quiet. Typically, I had two to three admissions and several phone calls. So THIS night was memorable to me because all was calm; all was peaceful.

I was in the ER within 10 minutes. When they arrived with the patient, it was immediately clear to me that this beautiful 2 year old boy was in deep trouble. No respirations; no heart rate; color gray. My heart sank. Even with bagging, I heard no air entry on his left chest. He had been like this for more than 30 minutes according to the EMT. I ordered a STAT chest x-ray. He had a total left pneumothorax (complete collapse of his left lung). With deep sorrow, I made the decision to stop all intervention.

Now the hard work was ahead of me—telling these parents that their child was dead. That was bad enough. But. It was Christmas. I knew that being Christmas was going to compound the pain. And as I expected, the confrontation was an emotionally horrendous experience. The mother collapsed in loud sobs into a nearby chair as she cried out that she was still nursing him. Then they recounted all that had happened over the week—they had brought him in 4 times, and nothing helped.

Then the father looked at me and said, “I wonder what Christmas had to do with my son’s death?” Incredulous, I asked him what he meant. He then went on to angrily accuse me and blame me for his son’s death. If I had just seen him when they called, he would not have died.

I had to be very cautious now; these parents had just lost a son. I asked him what he meant. He said he wanted to have his son seen but I would not; he questioned “what Christmas had to do” with my decision not to see his son. I discreetly and carefully explained that I did not turn anyone away who wanted to be seen. But he did not believe me. They left grieving the death of their precious boy—and angry with me for causing their son’s death.

My grieve was now compounded by accusations that I was culpable. Even though I “knew” it was not true, that was all I could think of all day and for the next several months.

The parents demanded to meet with me and my partner (the child’s primary pediatrician) the next week. I did not feel I could defend myself to two people whose son had just died. So I just stated what happened and sat in emotional pain as I listened to their criticisms and accusations.

My on-call days around Christmas after that were never the same. I had heightened expectations of evil lurking in the shadows and did everything I could to deal with or prevent anything from happening.

Christmas Day 2017 found me in the ER with my sister, who had suddenly gotten sick the day before Christmas. But early on Christmas Day, I was awakened by her incessant coughing at 1:30 AM. I drove her to Mercy Medical Center because they gave me the right answer to my question—there was no one in their waiting room.

I paid close attention while they took her vital signs. I felt her forehead before we left for the hospital and she did not feel hot. So I assumed her reactive airways disease had flared and that she just needed a breathing treatment. She would get that done; we would then purchase everything we needed to get through the holidays and everything would be okay. However, her temperature was 102.5 degrees F. I knew then that she had Influenza A. Immediately my mind began going in many directions as I tried to figure  out what my next steps were going to be.

So many people across the country had died from Influenza that year. The vaccine seemed to have protected her in years past—not this time.

I sat in the exam room with her for 5 hours as they did testing. She was placed on oxygen; had an IV secured in place, and was given breathing treatments. She was finally admitted with Influenza A and possibly pneumonia. After she was settled in her room, I left for home.

Over the next 24 hours, she was transferred to ICU and then back to the floor. I actually thought she was recovering, although slowly. I expected her to be hospitalized for 10 to 14 days. Our family members talked to her on the phone. I spoke to her doctors about her progress every day.

My husband and I went to visit her on December 28. She was off oxygen; was breathing easily, and was aware of everything. When we entered her room, she greeted us, but then said she was very tired and wanted to sleep. She asked us if we would “come back tomorrow.” We assured her we would. She called out to us as we left, “I love you!” We respondes that we loved her, too. After I reviewed her chart with her nurse, we left. We had just driven into the garage and brought the garage door down when my phone rang. I recognized the number. It was from Mercy. “Your sister is not doing well,” she said. “We need you to come back.” I translated the message to my husband, “Thelma is in Code Blue. We have to go back now.”

I could see the shock in my husband’s eyes. We said nothing on the 20 minute drive back to Mercy.

She had already died when we arrived. They explained that her heart simply stopped beating and they could not resuscitate her.

I was in shock. What just happened here?  Explaining it to the kids and other family members was difficult. They were looking to me for answers I did not have. They were looking for reassurance I could not give. She was 43 years of age. It was not supposed to be like this.

And there were unopened Christmas gifts and expected celebrations that would not materialize. And now I had a funeral to plan.

I now felt exposed and vulnerable. My trust in God was cracked—if He did not protect this child or my sister, could I trust Him to protect my children, my family member, or me. So Christmas was not anticipated with joy anymore; Christmas began to conjure up feelings of fear; I had a heightened awareness of illness and loss.

Although I intellectually knew that God was trustworthy, I FELT I needed to work harder to protect others and myself. I couldn’t depend on God completely anymore. I had to do my part. That deepened my sense of grief. Nothing anyone told me helped. After many years of this, I finally had to go to the Source Himself for answers.

That meant I had to STOP all busy activity and simply be in the moment with Him and with those I loved the most. I learned that if I had “been with” Thelma more, instead of trying to make sure she had everything she needed for a perfect Christmas, my grief at her death would not have been as profound.

And finally, if I had not had to work so hard to deal with the grief I felt, I would have seen the good in some of the things that happened to my sister: she was never in pain; she was simply tired and wanted to sleep; she told us she loved us and she wanted to see us again. And if her heart stopped, she simply went to sleep. If she had to die, the only thing that would have been better was dying at home in her sleep.

I believe that regret plays a big role in grief. So, this Christmas, I chose to do things differently, although I admit it has not been perfect:

We are only human and will make mistakes, but today determine to make your presents be your presence. And allow your grief to just be what it is—the pain of missing your loved one; not the pain of regret as well.